An entity has meaning in its own right. This gives it an unique character and an inner and outer range of significance. Nothing less is sufficient for an independent structure. The inner range of significance includes the potentialities of the entity and partly stems from the nature or kind of entity and partly from its history. Any real thing is potentially more than it ever actually is. This is true of situations as well as of entities such as a man.

Inner significance is confined within limits; the lower limit is in its bare requirements as a particular nature; the higher limit is in the highest degree of self-realization possible for it.

The range of outer significance stems from the connections every entity has with its world; that is, from its range of significant action. The master is the highest end served by the entity; the nourishment is that which the entity needs in order to maintain its own identity.

To give an illustration from general experience, we consider a home. A home has an unique significance or ipseity in the family at its core. Its lower nature is in the existential supports associated with the requirements for food, shelter and interaction upon which family life is founded. The higher nature of a home is its significance for the self-realization of its members; it is the 'natural field' for the development of complete people, but only up to a certain limit. The home serves human society: the master which it nourishes and which it contacts through the participation of its members in larger groups than the family. For its nourishment, there is the material of living - materials, foodstuff, information, etc. - which is without structure before it enters the synthesis of the life of the home.

Inwardly, the home is a meeting place of ideals and problems. Outwardly, it is a participant in the flow of influences and materials that make up the spiritual and material context of the community at large. At the centre is the individuation of the particular family.

The scheme of the pentad has enabled us to make a classification of kinds of entity - in terms of essence-classes - that is completely independent of spatio-temporal characteristics and relies only on modes of significance. 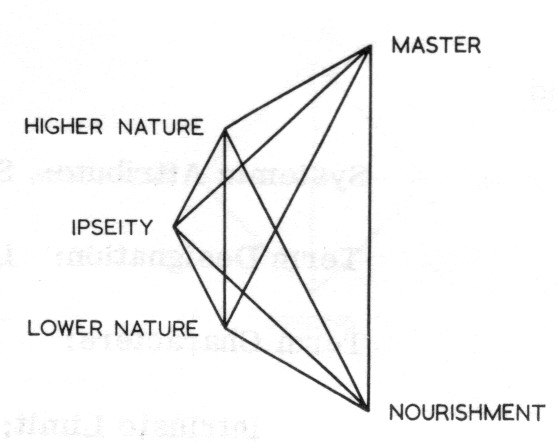 References for the Pentad:

Dee Finney
The Symbolism and Spiritual Significance of the Number Five

Anna Baldino
The Quest for 555 Chronicles