The term designations are of two kinds: there are three Sources and six Steps .

The structure represented in the octad is still lacking in concreteness, for it does not take account of hazard and uncertainty. For example, the octad of education does not enable us to take account of the disordering due to politics and economic crises.

The ennead is the first in the progression of systems that can take account of both purpose and the uncertainty of its fulfillment. Its principles can be illustrated by considering the inception and completion of a purposive process. A process initiated at A and directed towards an end B must, in any complete situation, meet with environmental factors which automatically result in some modified effect B". To avoid deviation, an independent action must be brought in to correct for deflections. This is self-regulation and is required for the accomplishment of any aim. There is a further factor, however. Outside of the developing situation there are uncertainties which may render the accomplishment of the aim useless. If this is not to be the case, another kind of action must be taken concerned with the perfection of the result. The inception of the process and the correcting and the perfecting elements, constitute a triad.

The overcoming of hazard is by a synthesis of dynamism and coalescence. The dynamism enables the process to work and the coalescence is the integration of the complexity of action as an independent event. Enneads are usually studied by means of the symbolic form known as the enneagram, derived from Sufi sources in Central Asia.

The six-pointed figure 142857 represents the inner sequence that is the concern of the intelligence involved who has the task of directing and coordinating the various steps. It is utilized, consciously or unconsciously, in the establishment of the artificially contrived environmental conditions necessary for processes to be completed. From this aspect, it has been studied in the sphere of industrial production and scientific experiment.

The three independent features that are operated by the triad 936 each lead to the inception of a process. Points 3 and 6 are called 'points of hazard' since three independent processes have to blend together. The construction of such a structured situation enables there to be a dynamic harmony, which manifests repetition in time. An obvious example of this is a kitchen serving a community, where the guiding intelligence is the chief cook and the points of hazard are the entry of the raw foodstuff, and contact with the needs of the community. 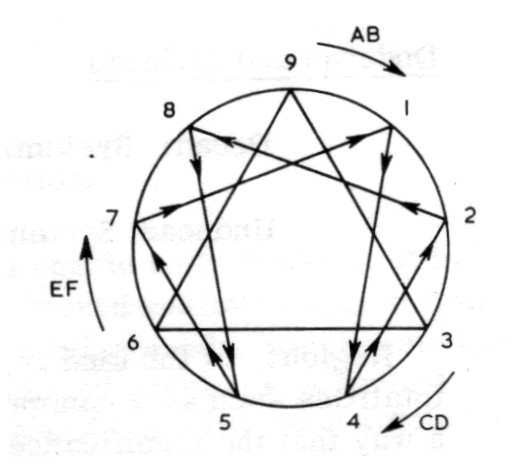 A.G.E. Blake on The Enneagram

Personality and the Enneagram

Note: The personality enneagram comes out of a much different tradition than Bennett's systematics and the Gurdjieffian Enneagram. As a number of us who have worked with the 9-point system have said, the approach is deeply flawed because it places types at the 3-6-9 position--simply not possible in the Gurdjieffian understanding. Newcomers to Systematics are advised to initially study the core works. Later, interested parties can begin to understand differences of approach and results.